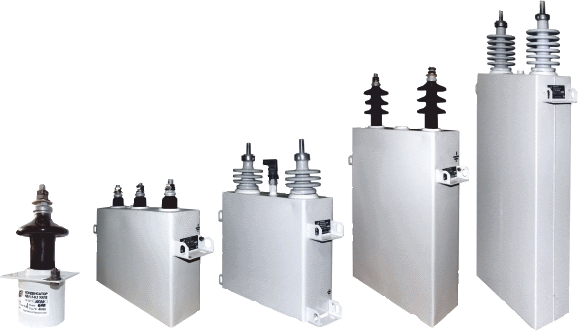 Capacitor Batteries are widely used in AC electricity transmission lines (ETL) which are switched on either in-parallel (shunt) or in-series into a break of ETL (series), and serve to increase transmitted power along ETL and to increase a stability of power energy system operation. Special capacitors and capacitor blocks are used to complete batteries.

At electrical energy transmission along DC ETL the capacitors take a big specific weight in the equipment (about 30% of ETL total cost), which are used as damping and equating elements in transforming/converting devices and also to complete filter and shunt batteries at accepting and sending ends of line.

Over the last years power semi-conductive (thyristor) converting devices for electric drive control are widely used which replace a contact-rheostatic control. One of the most important elements of these devices are capacitors meant for reactive power compensation, higher harmonics filtration and oscillations damping.

Special high-voltage and impulse capacitors use for complete power filters of higher harmonics also working in a set of static compensators of reactive power, capacitor blocks and capacitor banks.

In capacitors designation, the first number after type is rated voltage in kV;
the second – rated power in kVAr.
Permissible excesses: as per voltage - 110 %, as per current - 130 %.

Capacitors KEPF(М) for voltages 3,65; 4,4; 6,3; 6,6; 7,3 kV and power 100, 150 и 200 kVAr are manufactured without fuses built inside.
Capacitors are impregnated with ecologically safe dielectric fluid and equipped with discharge resistors.

2) – Direct current capacitors – are used to reduce harmonic currents passing through DC lines, for operation in a DC pulse transistor, for work in the circuits of high-frequency filters of traction substations.

Power filters of higher harmonics presenting in-series resonant contours "capacitance-inductance" connected to the busbars of 6-10 kV allow reducing the distortions entered into a curve of supply voltage by valve converters.
Whereby capacitors of filters are the sources of reactive power at a frequency 50 Hz, what is of great importance accounting low power factor of valve converters.
Power filter of higher harmonics

In filter designation: first number – number of harmonic;
second number – rated voltage in kV;
third – rated power in kVAr.
Power filters are completed with KEPF capacitors. Filters have a protection degree IP21 - for input cells and protection, IP00 – for other parts of filter (enclosing is made by the customer at the place). If filters with other characteristics are required, we are ready for constructive consideration of the customer's requirements.