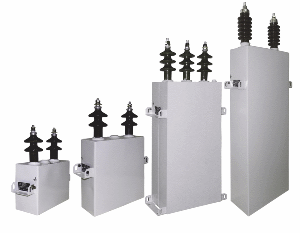 Electrical energy main consumers at industrial companies are such inductive receivers as asynchronous motors and transformers. Their operation is connected with consuming of reactive energy for electromagnetic field creation. Reactive energy does not produce effective/useful work but it leads to additional load of electricity transmission lines and generators when circulating between receiver and current source, and consequently it reduces power factor of a grid. All this increases losses of electrical energy for heating up cables and network wires and also windings of electrical machines, and it leads to a necessity to increase power of generators and transformers on the stations, increases voltage oscillations in a network and results incomplete power usage of primary motors.
Reactive power generation from a consumer is usually called reactive power compensation and the most convenient and effective source of it are power factor correction capacitors which fulfill the functions of energy saving equipment and energy quality increasing equipment.

* capacitors are equipped internal built-in fuses.
1) - Capacitors with a housing length of 450 mm are designed for the assembly of condenser units.

In capacitors designation the first number after type – rated voltage in kV;
the second – rated power in kVAr.
Permissible excesses: as per voltage - 110 %, as per current - 130 %. Capacitors are impregnated with ecologically safe dielectric fluid and equipped with discharge resistors. Capacitors for voltage 6,6/?3 and 20/?3 kV are manufactured in stainless steel.