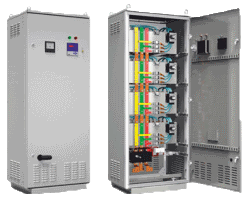 The presence of capacitors in electric power supply networks with nonlinear loads can provoke a occurrence of resonance phenomenon and as a consequence a current increase and capacitors overheating.
In order to avoid resonance modes occurrence it is necessary to use the banks presenting an in-series resonance contour formed by a throttle which is switched on in-series with the capacitors. Such banks are called mismatched filters of higher harmonics. The purpose of such connection is to reduce a network resonance frequency up to the value below the lowest higher harmonic. Throttle power is expressed in a percentage from the capacitor's power. Most frequently the throttles of 5.67%, 7% and 14% are used. Each value of the throttle power has its own resonance frequency. For instance, for 7% mismatching a resonance frequency is 189 Hz. It means that for all harmonics the frequency of which lies above 189 Hz, a network is an inductive resistance and for them the occurrence of resonance mode is unlikely. Therefore there is a solution of the problem for expensive equipment repairing which failed in the result of higher harmonic currents impact.

For automatic reactive power compensation of consumers' loads in general-purpose networks with voltage of 0.4 kV and 50 Hz when using the electrical load with nonlinear volt-ampere characteristic, where the harmonics are generated.